English tests compared: IELTS Academic vs PTE vs TOEFL vs Others

If you're thinking about coming to Australia, you will at some point encounter the IELTS (unless you're from the countries of exemption). The good news is that the IETLS monopoly on English language testing has been broken and the Australian Government are accepting other tests of English language ability.

The IELTS is jointly owned and operated by The British Council and IDP and is offered globally. This is the most well known of the English test and comes in 2 variations: General and Academic.

For higher education the Academic one is necessary however for other types of visas, all you need is the General test.

Pearson Test of English is computer based assessment and is almost as universally accepted at the IELTS. It's accepted for UK and Australian visa purposes.

The lesser known Occupational English Test (OET) is specifically for the healthcare sector and has an emphasis on communication in medical and health professional settings.

That being said, the OET is also accepted as evidence of English language ability in a variety of visa categories that aren't related to the healthcare profession, for instances, other work visas and student visas.

Based in the United States of America, the TOEFL iBT is an internet-based test that is administered at registered test centres. Availability is a little more limited than the wider known tests but overall still accessible.

It's also the test that is accepted from countries where IELTS is not available.

How do the test scores compare to each other?

The Department has issued the following to make it easier for everyone to understand what each score means and how it equates to the Department's standard of English language proficiency. 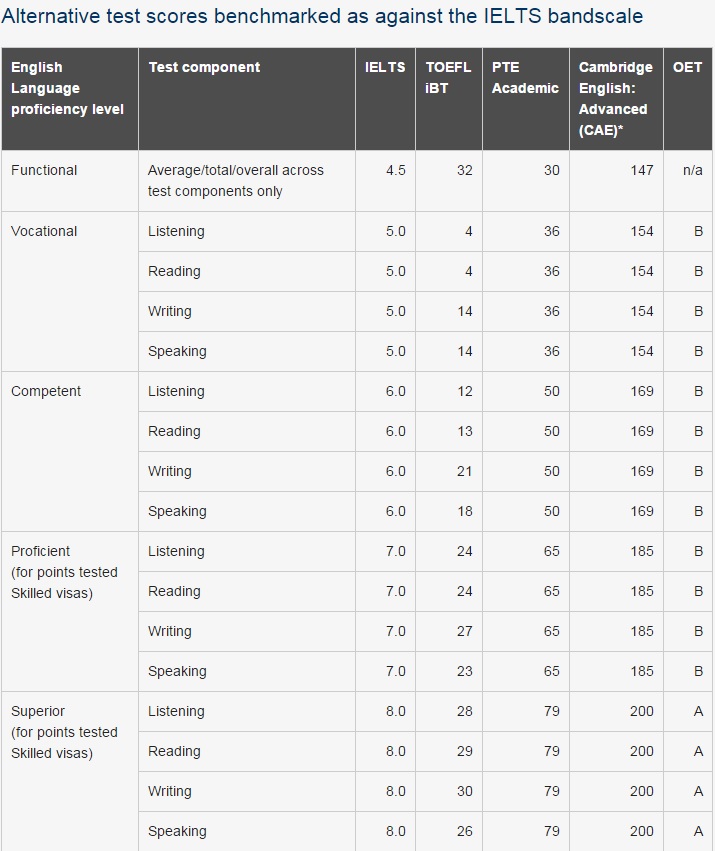 Which one to choose?

There can be strategic reasons to choose one test over another but then there are also constraints such as what the assessing authority will accept.

Whilst the Australian government is accepting many different English tests as evidence of English Language Ability, skills assessment authorities are still lagging and may require you to stick to the IETLS. It's in your best interest to ask before starting.

Another consideration is whether the formats of the tests work for you. Some of our clients really prefer the IELTS format and others have found it arbitrary and not so easy to pass.

Some of our clients have also discovered their preference after trying many times with one test and not achieving the results they desired. So therefore, it could be advantageous to switch testing formats if you have tried a few times and have not succeeded.

Here are a few great personal accounts of the differences and similarities:

What is easier - IELTS or TOEFL?

First of all, familiarise yourself with which tests are accepted for which visa purposes - it's still not universal at the moment.

Then look over the formats of the tests. There are sample and free tests online on their respective sites.

Decide which one would suit you and start studying.

Best of luck to everyone! If you need help figuring out which is accepted for what visa, get in touch and we can help you out.

Source: Which English language tests are accepted by the Department?